With the rise of Twitter it was inevitable that intellectual property issues would surface regarding “tweets” (information snippets under 140 characters in length).

Some are concerned that copyright might stifle the ability to reproduce tweets for collaborative projects. Twitter itself states, “We claim no intellectual property rights over the material you provide. Your profile and materials uploaded remain yours.”

So the website tweetCC has decided to take action, and create a list of Tweetsters who have agreed to license their tweets under open terms, using the creative commons license.

Here is the result of my own search: 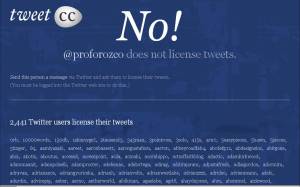 I met Allan Tokuda when I was a Teaching and Research Fellow at Northwestern University. I was helping teach a course on Innovation and Invention in the engineering program. Allan was one of the brighter and more inquisitive students. I knew he had some remarkable qualities when, before class one day, he took out a Rubik’s Cube. He could consistently scramble the puzzle and solve it in less than two minutes.

Allan and I eventually put our minds together to attack the problem of patent claim language and its obfuscating qualities. Allan brought top notch software coding and logical analysis. I brought my knowledge of claims and claim structures and the problems lay people and inventors routinely face when they try to read these sentences. Patent claims, for those new to patents, are the legal definition that describes the property boundaries of a patented invention. Patent claims are what get litigated in court and are located at the very end of the patent document.

The result of our combined efforts is something called the Patent Piler (at this Website). It is an open source project and resource guide that allows anyone to look up a patent by the patent number, search and compare any of that patent claims with other claims in the patent. Here is an image of how it works.

The tool, as shown above, highlights the differences between claims in the same patent.

Try it out for yourself. If you don’t have a specific patent to analyze, try inputting this curious patent number in the box: 6584450

If you like to code and want to make reading patent claims easier, try improving the source code, it is freely available at this site.

A quick note: for now the software runs great on Firefox, not so great on Internet Explorer.

A reader recently submitted the website: myfreecopyright.com, which I’ve dubbed the anti-creative commons. Like the legal innovations listed above, this is yet another resource that allows creators to engage their online i.p. and the law in a user-friendly way.

The difference, a big one, is that the myfreecopyright site allows you to notify others of your copyrighted content and allows you to register and date the work through their database. This is achieved in three steps: 1. Upload the work by allowing the site to subscribe to your content; 2. A digital fingerprint of the work is created; 3. The work is registered on the database.

Why go through this? Here is what the myfreecopyright site says:

What I find so interesting about this is that the Library of Congress is the official place for authors to register federal copyrights. Authors obtain copyright when they create the work in a tangible medium, but they can register it. Authors register their works to have the right to sue in federal court and obtain the high damages stipulated by federal laws. The myfreecopyright site does not register your copyrights in the Library of Congress, and does not help you locate and pursue infringers. It does (as mentioned above) put everyone on notice that you have claimed a copyright and have registered it in a public database, which hinders unauthorized users from claiming the public domain defense. This is another private technology solution to intellectual property law. In this way, it’s another example of how everyday folks are innovating and engaging their intellectual property, participating in what I call law 2.0

The Web has transformed how we gather, process and view information. Yet, the legal system has largely ignored the Web’s vast potential to settle legal issues. Just one possible way for the Web to improve the efficiency of legal determinations is through online surveys, which are cost efficient and quickly obtained.

Surveys are often used in intellectual property-related issues to empirically determine facts which are then interpreted to settle a question of law. For example, in trademark law, surveys are used to prove whether a competitor’s  trademark is likely to cause consumer confusion. If it is, then the plaintiff is provided some sort of legal relief. All to often, each side offers their own surveys developed by their own experts to advance their claims.

So here is a thought experiment proposal; why not use online surveys to gather facts that can then beused to decide legal outcomes?  Why not open up the survey questions to an online community to gather facts? I think doing this might make the system more efficient, speedy, and unbiased. It would also include interested public participants and show the public how the system works, and what their beliefs and survey responses mean from a legal standpoint. Including the public this way could enrich our legal system.

What are some of the problems that might arise from this system? An obvious one is that one side might try to influence responses. Technology might provide an answer through a secured response system. Another alternative is to limit the sampling to a closed user group. Better yet, a response similar to open platforms like Wikipedia might emerge. A completely open community of responders, who have some interest or stake in the legal question, would theoretically offer an accurate appraisal of the public’s view.

Another problem would arise in deciding who frames the questions. Whoever gets to define the scope of questions has a great amount of discretion.

In spite of these difficulties, which are likely surmountable, the question lingers: Why has our legal system failed to harness the Web for fact gathering? Is it falling too far behind the times? Is it too entrenched in its formal, text-based culture?

I’d love to hear your thoughts and reactions to this question.

The information on this blog is for entertainment (and occasionally educational) purposes and should not be construed as legal advice. Please consult a licensed attorney, not an academic like me. (I'm hard to reach in my ivory tower).